podcast
PREMED QUIZ
Ask me anything
About
Home
Blog
contact

To listen to the full conversation, click here or press play below!  It’s no secret that women (along with other minority groups) in medicine face barriers and challenges that our white, male counterparts don’t have to endure. But one aspect of being a female doctor that may not be as evident is the aggressions and […]

Ready to Make Your Dreams Happen?

To listen to the full conversation, click here or press play below!

It’s no secret that women (along with other minority groups) in medicine face barriers and challenges that our white, male counterparts don’t have to endure. But one aspect of being a female doctor that may not be as evident is the aggressions and micro-aggressions we face from other women in the field.

I recently sat down with my highly accomplished friend Dr. Cherise Lathan on my podcast, The Female Doc Show, to talk about our experiences of being women of color in medicine.

And these woman-to-woman aggressions are met with other microaggressions when practicing in the culturally diverse cities that we practice in. As Dr. Lathan describes, there exists a microaggression that subsists of “women of color are coming for you.” So, as women of color in medicine, we’re introduced to a different dynamic and an added layer of aggression.

I asked Dr. Lathan what her most memorable experience is with women-on-women microaggressions. She described her experience in graduate programming as one of five black women in a class of 100 students.

“Somewhere in the first year, it just became this unspoken expectation that we all were going to study together. All of the black girls had to do everything together.But to me, it was just about finding out who is going to be that strong study partner. It didn’t matter the color of your skin. I actually didn’t care.

So I think it was right after our midterm. I started studying with a new group because not only did I see how they were performing and their commitment and their study ethic, I felt like we vibed a little bit better from an academic perspective.”

Once she switched study groups, there was a major shift – her old study group wouldn’t talk to her, acknowledge her, and just generally shunned her.

“Just because I wanted to study with other people now, mind you, it wasn’t that I abandoned them. They just observed me in another room studying with a group of three white women. And because I did that, I was now the black sheep. And even to this day, they will not engage me. They won’t tap into my network or anything that I’m doing.”

For me, as a Pakistani American, I faced similar situations where it’s felt like I’m trying to fit in with my own culture. Although there’s a huge range of how my fellow Pakistani American students grew up, there were some that believed if you’re not loyal to us, then you’re not Pakistani enough.

But by the same token, you could be with your white girl study group and not fit in exactly there either. Because if you talk about something that’s going on at home or a struggle about your parents immigrating here or other discrimination, they just don’t get it.

Unfortunately, these aggressions don’t stop once you’re in the workplace. These sentiments get embedded into our professional and personal lives and rise with us as we reach senior-level positions. As females there can be a mindset that if you’re not loyal, then you’re not a friend and you need to go away. And I’m not going to help you anymore your entire career and that’s it. Then when we do reach these senior-level positions, we’re not helping each other. 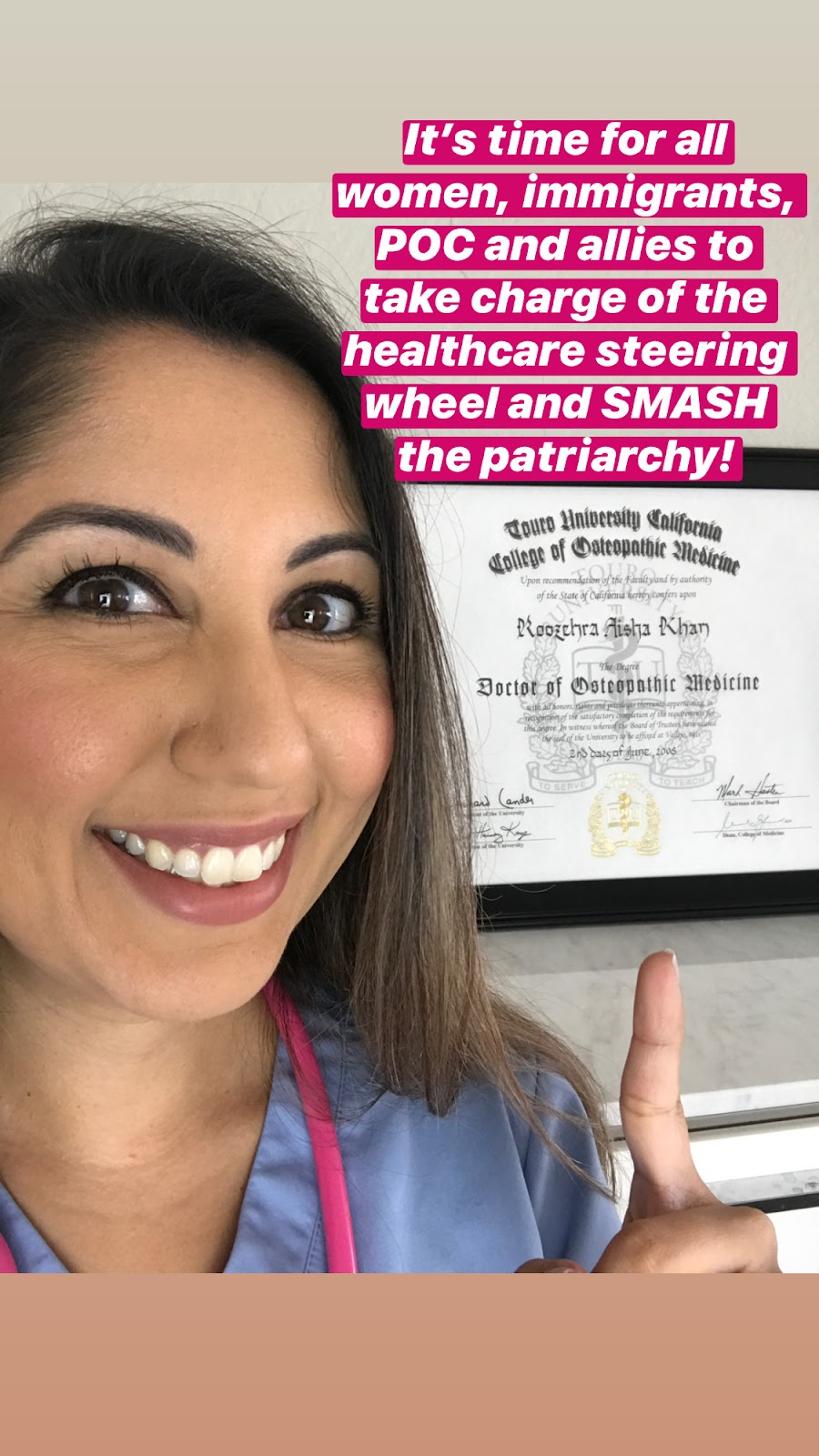 “It’s just silly how people let these little things create this narrative based on some experience that really has no value. And it really just keeps dimming our shine. It just proliferates the problem of why we are having these conversations about what it’s like to be a woman in healthcare,” explains Dr. Lathan. “I mean, are two dudes sitting talking about what it’s like to be abandoned healthcare? No.”

One reason these strifes between women appear is because society expects us to be nurturing. And when women are not nurturing, we are punished so much more because we’re not allowed to step out of that box.

As Dr. Lathan suggests, as you grow professionally and gain access to more rooms and different conversations, that nurturing aspect isn’t rewarded. So, you morph into what you think you need to become to achieve success. Because we as women know we have to work harder than our male counterparts, particularly when now you have an ethnicity behind it that comes with a connotation.

Not only as a woman do I need to work harder, but now as a woman of color, I need to work double as hard. You’re not going to climb if you’re so worried about creating space for other people because you’re trying to create a larger gap between you and those that are coming behind you.

This creates an immense pressure that is exasperated by being in a profession that is very much male-dominated. So to survive, we’ve sort of adopted stereotypical hyper-masculine traits.

When I was in residency, I used to brag about how I didn’t know how to cook because, for me, cooking was female-gendered. My mom used to tell me when I was younger that I needed to learn how to cook for my husband. This was a way of pushing away my absolute femininity by saying no, you will not mistake me for a wife. I’m a doctor.

My teaching style is similar to how I was taught, which means that I am going to challenge you. And if I don’t challenge you, that means I don’t see your potential. Several years ago, I had some female fellows who were brilliant women and I challenged them because of that. They later gave me feedback that they thought I was harder on them as females than I was on the guys.

The feedback took me aback, and I remember thinking: Is it really me being harder on them and pushing them because I see their potential or is it that they perceive me challenging them as me being not nurturing because I’m supposed to be the nurturing one?

Although I was hurt by their feedback because I always want to ensure I’m lifting women up, Dr. Lathan gave a different perspective on situations like these: “It’s all about iron sharpens iron, right? When you’re cut from the same fabric that’s who feeds into you, that’s who nourishes you, that’s who sharpened your tool so that you can be most effective. So I think like we’ve got to stop making excuses for ourselves when we get challenging feedback. Because you know what, they should be honored by that experience because that was you being nurturing. You poured effort into those young ladies and you asked them questions and made them better.”

“I think the most important thing is just be authentically you. We are all different. We all come in shapes and sizes and shades and various experiences, and there’s no one way to move. And there’s no one story about who we are as black female doctors period.

I had a third year DPT student with me at USC, and she’s actually now practicing at Emory university in Atlanta. She called me at like six o’clock in the morning and was like, ‘Oh my gosh, I overslept. I don’t have enough time to do my hair today. Can I wear a headscarf?’ And I was like, why would you call and ask me? Of course you can.

There are beautiful ways that women wear head wraps. And I was like, if it’s presented in a neat and clean way, there’s no reason that you can’t wear a headscarf or head wrap. And her response was ‘Well, your hair is always straight and it’s always done. And you always look presentable and well put together at work.’

And I was like, Christina, we’re two different women, right? We have different backgrounds. It’s the variability in our blackness. That makes us so beautiful. Right? If I could wear a natural curl or put a head wrap on and carry it and pull it off, I would. But I can’t, this is my vibe. This is actually easier for me.

And so I think it’s that conversation of why ask permission? Just be you. Just be your beautiful, natural self. Speak confidently, ask questions, challenge the status quo, participate in conversations. Don’t cower or dim your shine because you have created this narrative that, ‘Oh, I’m a black woman. And I need to be deliberate in how I move and how I speak.’

No, you’re prepared for this moment. And if you weren’t prepared, you wouldn’t be in this room.  That’s the biggest thing I would say to any young black woman wanting to get into healthcare or who’s struggling in healthcare”

The second thing Dr. Lathan recommends is connecting with a network that supports you. Even if you’re surrounded by white, male peers and colleagues, there’s always a network for you to connect with.

I think the younger generation doesn’t understand the difference between mentor and sponsor. They’re often disappointed because they believe that their mentors should be acting as a sponsor. A mentor is just a day-to-day person like you’ve described who is going to help you navigate maybe some small problems. You go to them with a problem. A sponsor is someone who finds opportunities for you, presents them to you, and sits in your success.

“I do think all women of color also need to identify a sponsor. You have to find that person that’s going to reach down and pull you up. That sees something in you, that’s invested in your success,” says Dr. Lathan.

With this in mind, Dr. Lathan shared her life mantra: “You have to work hard and party harder. I know it’s cliche, but it’s about holding yourself to this high standard of productivity and efficiency, and then you learn to appreciate and enjoy it.

Being able to show that to other young women who want to be in a position like yours one day — that you can have it all because you’re filled with joy and have tremendous successes and accolades. But it’s really about how you celebrate and create that space.”

« Getting Involved in Politics is Important as a Doctor

back to blog home

I'm a double board certified ICU doctor currently working on the frontlines and I teach pre-med students how to get into the medical school of their dreams with the Future Doctor Formula.

How to Get into Medical School Despite Low Scores

MD vs DO
What's the difference?

Home
Ask me anything
About
blog

ask ME A question >